When on tour, we often talk about travel karma. Some days it goes for you, other days not so much. I turned up at Heathrow, having already checked in to Boston, only to find that I'd been moved out of my preferred window seat. I thought it was going to be one of those days. Turns out it was quite the opposite: Rob and I had been upgraded. More leg-room, proper cutlery and china, a glass of champagne...what a difference. And the day kept giving once we landed: barely a queue at immigration, our luggage was waiting for us, the car rental admin took no time at all...we were on our way. We arrived at our smart campus hotel in good time (we are starting the tour at Dartmouth College, 3 hours from Boston) and went for our customary first-night burger and beer. Plane film reviews were swapped, Don gave us the lowdown on what to expect at the venue (he had arrived a day early to give a workshop and taught a class), and we tried to work out which states between us we haven't yet been to. We reckon it's just five: the two Dakotas, Idaho, New Mexico and Alaska. Any promoters out there who might like to help us get to the full 50, please do get in touch! 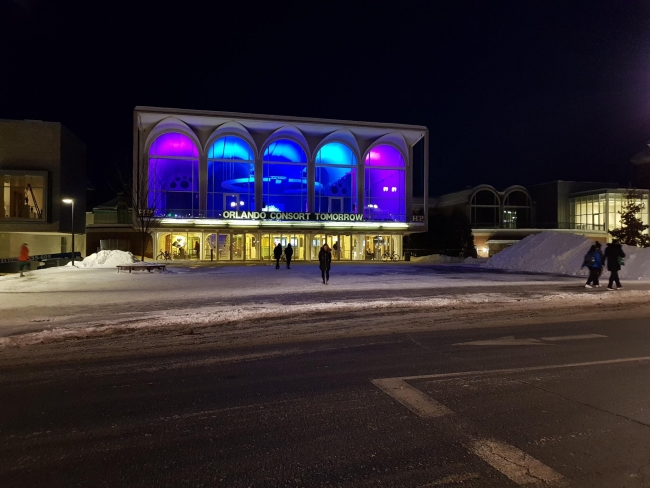 Having got all our travel out of the way, we had plenty of downtime today. Between us I think we covered all the restaurants in town either for breakfast, brunch or lunch. I managed to get a couple of gifts for my boys (the eldest collects refrigerater magnets from every city I travel to, my youngest has pencils and flags!) and paid a fleeting visit to the gym.

The gig went well and the concert hall was great. And judging by the audience response, we acquitted ourselves well. Don and I did a short post-concert q&a with Dr Diane Belcher, and then it was on to the traditional post-concert beers in Murphy's, helped along with some nachos. Thankfully in this freezing weather, the only outdoor part of that itinerary was to the bar itself, a sacrifice well worth making.

We Brits are known for talking about the weather; it's usually just a conversational tool. After all, it's not often we get true blizzards, hurricanes or temperatures dipping much below freezing, but when we come across real weather as we do out here in the States, it becomes a topic of urgent conversation. This coming weekend we're expecting snow and ice-old winds up in Ohio. Today it rained. And it rained. And then it really rained. We set off from Dartmouth, Angus and Don driving heroically in torrential downpours, and three hours later we arrived in Portland, Maine. On arrival, we grabbed a quick bite to eat - I braved a crab and cheese melt thinking, I'm on the coast, let's try a local dish; well, you win sone you lose some! - and I had an aborted power-nap (the hotel was undergoing renovations so it wasn't exactly peaceful). Tonight's performance of the film project was at Hannaford Hall on the USM campus. Once again, we had an excellent technical team led by Shannen McCartney and Jeremy, her colleague, who helped us get set up. The hall had a slightly dry acoustic but it felt intimate nonetheless and a standing ovation after the performance was gratefully received. A quick drink followed with our old friend Steve Wilson from New York Polyphony whose parents are locals here in Portland.

Today started with a workshop in Falmouth with Oratorio Chorale, led by their brilliant conductor Emily Isaacson. We always enjoy working with other choirs and find the experience really rewarding. Today's repertoire was an extract from Rossini's Petite Messe Solenelle and Poston's Jesus Christ the Apple Tree. I admitted at the time that I was apprehensive about their proposed aleatoric version of the Poston - it has been one of my favourite carols since I recorded the treble solo as a boy chorister and it holds special memories - but I need not have worried. It was a beautiful performance and gave me goosebumps.
Following the workshop, we drove straight to the airport ready to catch a flight to NYC. We need not have rushed though. Thanks to Trump's government shutdown, our flight was delayed due to staff shortages at La Guardia. Our travel Karma had begun to catch up with us...
On arrival in New York, we headed our seperate ways. Don had dinner plans with friend and fellow medieval musicologist,Professor Anne Stone. Mark, Angus and Rob met up at our regular haunt, The Amsterdam Alehouse, and I travelled downtown to meet old friends who had landed in the city this afternoon.
(It shouldn't be a footnote but, as he's too modest to trumpet the news himself: congratulations are in order to Don who has recently been awarded his Doctorate from Nottingham University. We're all incredibly impressed, and grateful for the immense amount of work he has put into the Joan project. Dr Greig will see you now...)

With nothing on the schedule till an afternoon rehearsal, we were left to our own devices this morning: muesem and gallery visits, shopping, runs around Central Park...and big American breakfasts all round.

We left Voices Appeared behind tonight to sing a standard concert. The venue was St Mary the Virgin, a large church just off Time Square (also known as Smokey Mary's), a place we've been to many times. It's a large church with an acoustic to match - quite different from the halls we have performed in so far - and we revelled in its warmth and the echo. Hosted by our good friends at Miller Theater, we performed a programme of 16th-century pieces centred on a theme of poetry and music. Having Rob along was a luxury, enabling us to sing 5-part music we wouldn't normally be able to do, most notably Josquin's famous La Déploration de Johannes Ockeghem. 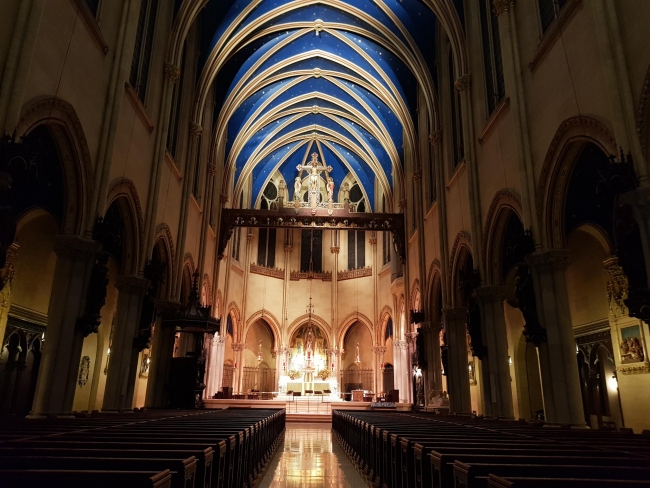 With eyes on our 4am airport taxi tomorrow, we signed a few CDs and said hello to our friend and supporter from Miller Theatre, Melissa Smey (promising to meet for our customary beer and nachos next time!) before trying to catch a few hours kip...

Our final day was set to be a long one. Thanks to a schedule change by our airline, we had to book a 4am taxi to La Guardia - not much fun. But the journey was smooth and we were checked in to our hotel in Columbus, Ohio by 8am, allowing enough time for a snooze and a shower before heading off to our final venue. 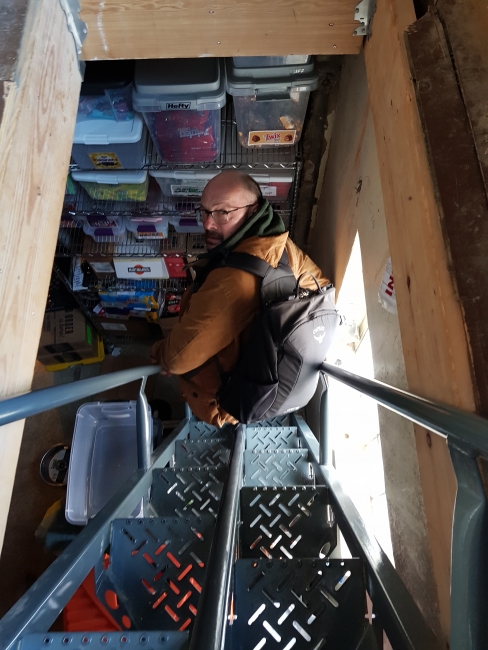 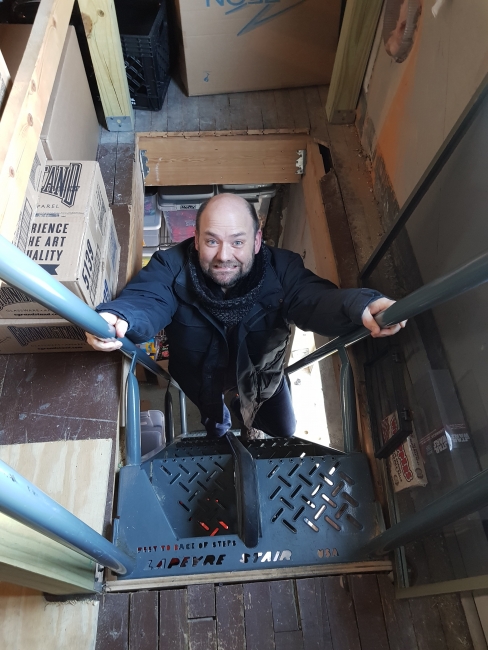 And what a venue. The Grandview Theatre & Drafthouse is the archetypal all-American independent movie theatre. Complete with pin-ball 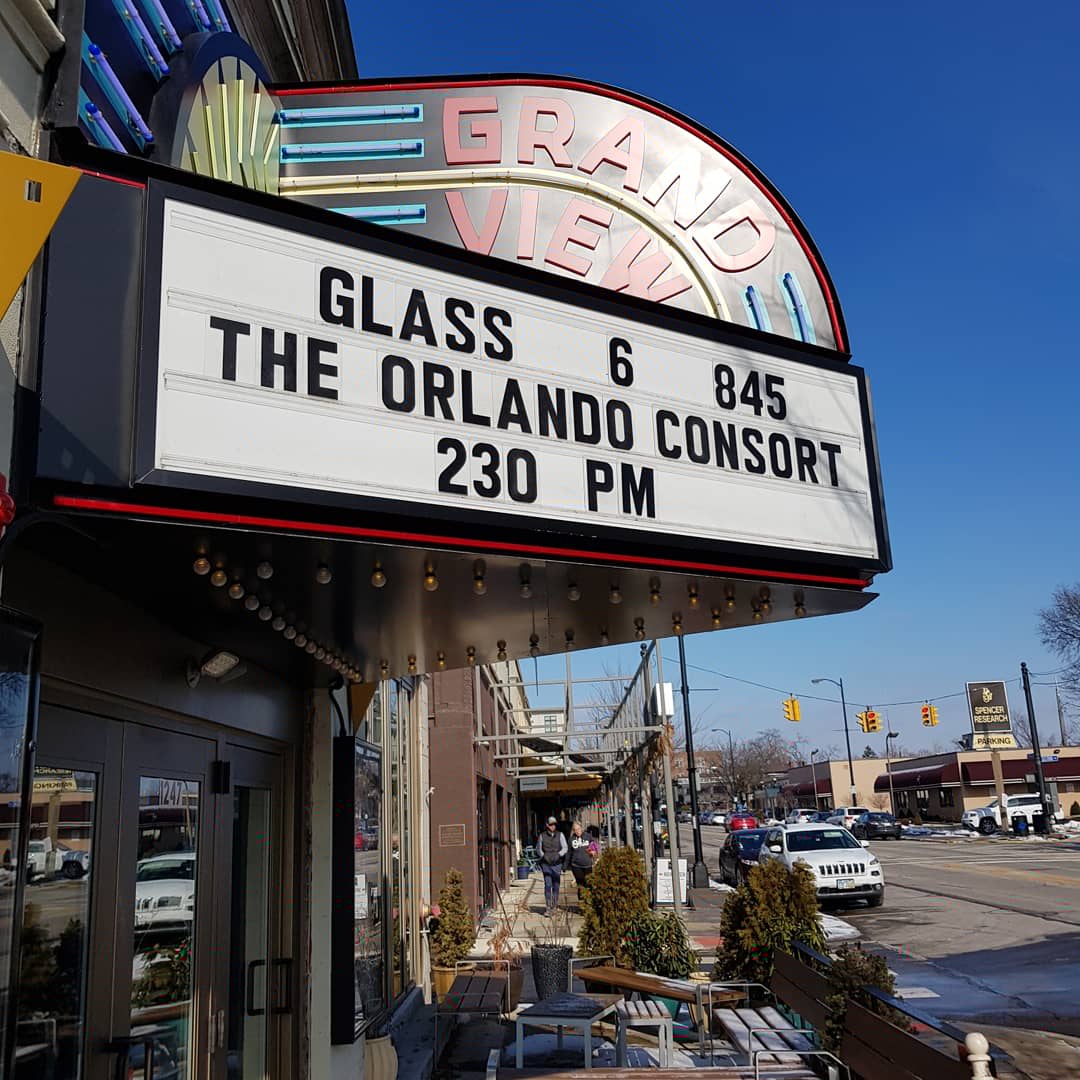 machines and proper popcorn in the foyer (the unforgettable smell drove Mark mad), it couldn't have been more different to the cavernous New York church we sang in last night. Everything about this set-up was unique to us. We learned early on that we would have to start the show by being in control of both our tech screens and the vast movie screen above us (Mark handled the pressure with aplomb). Our changing rooms were up in the eves of the building, accessible only by climbing a ladder (challenging under normal circumstances but lethal with a 23kg suitcase in tow!). And the risk of snow and travel chaos ahead added to the atmosphere. The performance was a success though and the audience seemed to be blown away by the film and the immediacy of our singing in the small and intimate theatre.

The threat of Angus, Don and Rob not being able to make it to Chicago O'Hare passed, thankfully, and Mark reached Boston, so all four of them made it onto the plane home, albeit after nearly a 24-hour day. I had left them to it, heading off for a four-hour drive to see my sister and her family in South Bend, Indiana. I made it there just in time: six inches of snow fell that night and temperatures plummeted to -15c. It turns out a polar vortex was on its way...

[You will be pleased to hear that Matt made it safely home - Ed.]