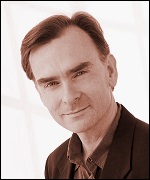 I was always into music - the usual school choirs, school orchestras, and so on - and was a very keen trumpeter, though I never saw myself going down that route full time. However, it was almost a spontaneous thought to give singing a go and, without perhaps realising the course I was setting out on, I managed to gain a choral scholarship to St John's College, Cambridge, where I read history. In fact it was a good thing that I got a choral award, as my A level results were so bad that no other university would have accepted me. Still, I very much enjoyed the work (honest!), specialising in American history and ended up with a respectable degree.

After that I undertook a post-graduate certificate in education, which sadly illustrated to me that I was not cut out to be a teacher, and then post-graduate vocal studies at the Guildhall School of Music and Drama in London. Since then I have been singing full time and enjoying it for almost all the time. I have been lucky enough to work with some excellent groups (Monteverdi Choir, Taverner Consort, Tallis Scholars, Gabrieli Consort) and some top-rate conductors, and have also done my fair share of solo work around the world. Singers are a moaning bunch - have you noticed how they complain when they have too much work, as well as when they have too little? - but we have a pretty amazing time when you think about it. How many other people get paid to travel to some extraordinary places and then do something which they would probably be doing as a hobby if they weren't do it professionally?

I do a fair amount of the day to day administration for the group but crucially Don handles all matters connected with the accounts, a task for which I have neither taste nor aptitude. While there is inevitably a certain amount of drudgery, I do enjoy researching new programmes - there can be a frisson of excitement when you hit on an idea that you know is going to work and then set about assembling the music to match. Perhaps our 'Food' project is a good example of this as a small idea that branched out in so many fascinating musical, historical and culinary directions!

In the last year I have been given opportunities to indulge my interest in designing and delivering programmes in new and very exciting directions. In September 2009 I joined the Oundle International Festival (www.oundlefestival.org.uk) as their Creative Projects Associate, working with a specific brief to develop new projects that would have education and community applications, thereby allowing new audiences to appreciate and participate in classical music. Then in August 2010 I took up an appointment as Artistic Director of 'Music in the Round', a Sheffield-based organisation that promotes chamber music on a regional and national basis (www.musicintheround.co.uk). Having always thought of myself as being first and foremost being a 'chamber musician' I feel that I already have a strong affinity with MitR's ambitions to develop an appreciation of all the potential manifestations of this musical genre, from what might be described as standard classical repertoire through to wider and even more liberating interpretations that touch on numerous and diverse repertoires.