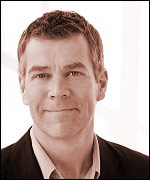 I was born between Dunstable and Luton in England, a suitable location for someone who has ended up being an itinerant singer of early music; Dunstable is a famous C.15th English composer and Luton is infamous for its airport.

A rather predictable though by no means preplanned life for a singer of early music followed: Chorister at Westminster Abbey, Choral Scholar at Canterbury Cathedral.

After getting a First in English and Film Studies at the University of Kent at Canterbury followed by post-grad work in Film Theory and despite serious attempts to fly in the face of such an upbringing (taking in lecturing in Film Studies and Semiology, reviewing films, early acting promise squandered in walk-on roles), I ended up in the early music 'scene' in London.

More by luck than judgement, I was in the right place at the right time and joined Tallis Scholars in 1985. Similar good fortune followed in 1988 when I was a founder member of the Orlando Consort. Along the way there has been singing with Westminster Cathedral, Gothic Voices, Taverner Consort, Fretwork, Gabrieli Consort, Cardinall's Musick and many choruses. Also active in the pop/session/musicals world and general "gun for hire", I'm happy and eager to experiment with different vocal styles from pop to musicals. Hobbies include watching movies, TV (I'm a great fan of Deadwood), reading, listening to jazz, beer, shopping, sport, running, and following the unpredictable progress of the English cricket team. I also plan holidays and write.

My first novel, Time Will Tell (Thames River Press) was published in 2013. It's set in the world of early music, both in the present day and in the fifteenth century where the behaviour of composers like Josquin and Ockeghem comes under close scrutiny. I have also published several academic articles - in Screen, Early Music, Tijdschrift van de Vereniging voor Nederlandse muziekgeschiedenis, The Musical Times, Music and the Moving Image - and chapters in The Cambridge Companion to Recorded Music and The Oxford Handbook of Medievalism. My current research is focused on the intersections of early music and cinema, and a my book on baroque music and post-war cinema was published by Cambridge University Press in 2020.

Recordings with which I would be happy to be associated are the Tallis Scholars' recording of Josquin's Pange lingua and La sol fa re mi masses, anything by Gothic Voices I've been fortunate enough to be involved with, and all of the Orlando Consort's recordings.

I have given lectures and workshops in musicology at Harvard, Stanford, Notre Dame, Peabody Institute, Vanderbilt University, Georgetown University, Boston University, Boston College, Wellesley College, and at various conferences, including two annual meetings of the American Musicological Society. I am currently an Honorary Research Fellow at the University of Nottingham, where I received my PhD in music.