How we do it

How we do it (by Donald Greig)

We’re often asked what we’re doing, up there beneath the screen, earbuds in, heads down, reading from folders and consulting a laptop screen. This is something of an explanation. In the early days of film scoring, composers wrote music to last a specific amount of time, achieving that by dividing the beat and ascribing metronome marks. Then, more often than not, it was down to a conductor to observe those instructions in the recording studio. The orchestra would be assembled beneath a large screen, with a view of both afforded to the conductor. The metronome mark would be a guide only, specific moments – ‘stings’, beginnings or endings – indicated by a streamer that ran across the film so that the conductor could co-ordinate that particular dramatic moment with his beat (it was, ubiquitously, a man conducting) or 'punches'. On rare occasions the director would re-cut his movie to fit musical moments – I’m thinking here of Spielberg and John Williams recording E.T. when the specific ‘bumps’ of the score refused to align with those of the bikes as they hit ruts in the road – but essentially synchronisation between sound and image was down to the conductor.

These days the conductor, orchestra and singers all rely on a click-track. This is an audible click set at the required tempo and transmitted to all in the studio by headphones. The tempi these days are anally exact – it’s not uncommon to see a metronome marking of 66.2 bpm, for example – the occasional speeding and slowing no longer trusted to a human mediator. The conductor acts more like a referee than a conductor, relaying a tempo that can already by heard, signalling where the cue begins, a communicator between performers and the production box.

I’ve sung on too many film soundtracks to count and can vouch for its efficiency. But occasionally it’s obvious that one is singing too emphatically, the click of the beat transmitted unconsciously. When The Orlando Consort is in the recording studio or on stage it’s very different. Only when we rehearse for a recording do we ever use a metronome, and even then it’s by far from the exact instrument for which it’s well known. We use it as more of a marker, a rough indication of where we might start when we come to record it. It saves arguing all over again about the ideal tempo. It saves time. Sometimes, after a few run-throughs in a different acoustic, we’ll decide that it’s too slow or too fast and we’ll create a new tempo reference. That, though, is not so easy. The problem is that the tempo changes from bar to bar, even beat to beat. In other words, musical performances ebb and flow, though we’d all swear blind that we’re keeping perfect time. Perfect, of course, doesn’t always mean metronomic. 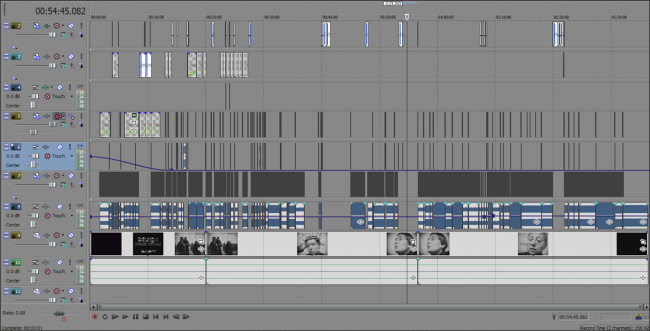 We wanted to keep that variation in our performances for the film project, but at the same time it was essential that we began and ended cues at specific points. All of that argued for some kind of click track, but singing as we do, a cappella and without amplification, headphones were inappropriate. [Incidentally, if you want a more academic argument about the differences between recording in the studio with headphones and without them in churches or other venues then you might want to read a chapter I wrote entitled ‘Performing for (and against) the microphone’ in The Cambridge Companion to Recording ed. Nicholas Cook, John Rink and Daniel Leech-Wilkinson (CUP, 2009)]. We opted for the beats marked on a screen. That allowed us both to see the movie and to respond to the emotional charge of the scene, but also to locate ourselves temporally. And, crucially, it provided flexibility. Whoever was conducting – a task we share out amongst ourselves – could move the tempo forwards and backwards, adding short accelerandi and ritardandi, approximating more closely our usual working practice, the requirement for exact synchronisation limited to the kinds of stings I mentioned earlier.

All of that meant that once the score had been roughly assembled then each beat needed to be marked onto a digitised version of the movie. That task fell to Eliot Lindsell, a resourceful Digital Media student at that time and, coincicentally, my nephew, who came up with several very useful suggestions and stuck to the (sometimes dull) task in hand. He laid out the movie first in Sony Vegas, then applied metronome beats and gave each of them a graphic representation. 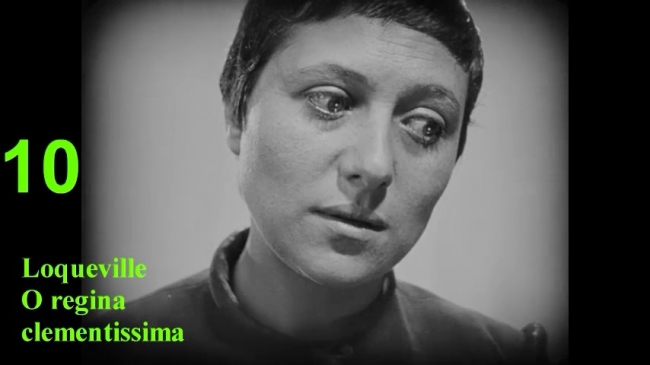 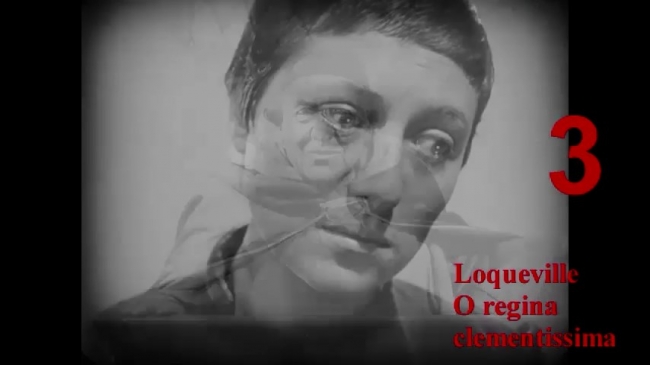 What we see in the centre of the screen is the movie itself. In red on the right side of the screen are cues the beginning of the next piece, while in green on the left side numbers dictate what it is we’re actually singing. The name of the piece is given in both instances, as well as the number of the bar and the remaining beats, hence 1,2,3,2,2,3,3,2,3,4,2,3, etc. Most cues finish early, which is to say we don’t give the final few beats allowing for an organic finish. Sometimes there will be an additional cue to end the final chord, perhaps a spat-out consonant that coincides with something dramatic. At other times we simply judge it between ourselves in one of those seemingly impossible telepathic moments of communication. For sections of plainsong, where the ebb and flow is more obviously pronounced, we have a travelling bar that moves from left to right, showing us where we are and roughly how much time we have left. 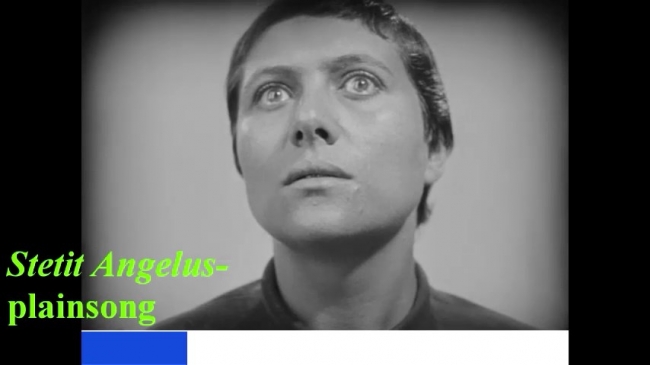 As an audience you should be blissfully unaware of this, even if, should you choose, you could focus on what we’re doing, inevitably at the expense of the film. And that’s not our purpose, which is always to serve the film, our contribution secondary to, accomplished, like most film music, unheard and unnoticed.

Oh, and the earbuds? They're there simply to give the very occasional pitch cue. Normally this would be done by one of us humming the note, but that would prove too distracting. As to the sound of the pitched note, well, that's another long story for another day.

In addition to the programme notes printed by presenters, audience members might also like to see a scene breakdown that describes the action and explains something about the music that it performed and the reason for the choice. Please click here.