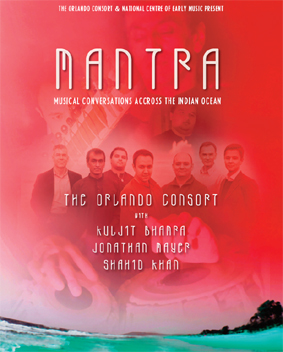 The album, Musical Conversations across the Indian Ocean is available from Amazon.co.uk .
This music has been featured in our Arts Council tour over the past year (see below) and all of the music featured in those concerts can be heard on this new release.
The premise for the project is the meeting between the Portuguese missionaries and the local Indian musicians in Goa in 1510.  This, unlike other colonial impositions, featured a distinctly collaborative engagement: rather than forcing the locals to listen and learn, the missionaries invited them to contribute to - and presumably also to adapt - the music that they brought with them.  Our project was very much in the same spirit, though the Orlandos were, we hope, considerably more open to understanding the ethos of Indian music and to experiment with it.
With no clear evidence of how the original project developed, we were thus provided with the liberating excuse to imagine how the music might have sounded.  The pieces on this CD are a modern take on that first musical crossover, featuring new compositions and genuinely collaborative presentations arrived at in workshops through experimentation and discussion.  Truly, then, new music for a new audience.

“Everyone was left smiling. That this was achieved so effortlessly was down not only to the charisma of the musicians, but also to their outstanding camaraderie and musicianship as they effortlessly explained how music from 16th century Goa was inspired by earlier “fusion” of medieval Christian as well as Portuguese and Indian music.” Salisbury Chronicle

“A perfectly crafted “lesson” in how differing musical traditions can be integrated… mesmerising.” Salisbury Journal

“Billed as "musical conversations across the Indian Ocean" this was a real jewel.” Brighton Argus

“Above all, though, this is one of those glorious musical enterprises that must be heard.” Early Music Times