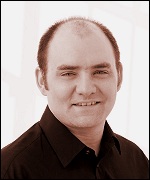 Like many of my colleagues in the singing world, my path here has been at once the most natural and the most random thing in the world. I suppose I have been singing since I was very small (perhaps I should rephrase that – very young) in school choirs and so on. I even had a dabble at playing various instruments: my mother forced me to give up the violin, and I could only ever play ‘Happy Birthday’ on the saxophone, so I guess I discovered where my strength was pretty early on. Singing was still no more than a hobby when I found myself at Clare College, Cambridge, reading Classics. After three years as a choral scholar there, and unsure how best to use my Classics degree, I applied – successfully - for a job as a lay clerk at St George’s, Windsor. It was only then that I gave serious thought to the rather ambitious notion of making a living out of singing. A rent-free flat in a castle can be a deceptive thing.

Three years later I started a postgraduate course at the Royal Academy of Music. Highlights of my two years there include a very exciting - for me, at any rate - operatic debut as the Male Chorus in Britten’s Rape of Lucretia, and winning a prize for the best final recital. All the while I had been wheedling my way into various choirs and consort groups, as well as doing the almost statutory church work to make ends meet – the Brompton Oratory, followed by St Bride’s Fleet Street. And then one day my boss at the time, one Robert Jones, invited me to do an audition – correction, two long and difficult auditions - for the Orlando Consort. That was in 2002 and since then, well, I’ve learnt an awful lot about very early music!

I left St Bride’s in 2006 to take up a job at Westminster Abbey. When I’m not there or working with the Orlandos, I am usually to be found working with the Sixteen (you may be unfortunate enough to have seen me on tv in the recent BBC ‘Sacred Music’ series). I love to do solo work when I can, too, although it’s been a while since I’ve been able to find the time to do opera.

I live in Sussex with my wonderful wife Susan, who is also a singer, and my equally wonderful son James (6 years old at the time of writing). In what spare time I do get, I enjoy playing golf (badly) and doing cryptic crosswords (less badly). I dabble in the garden and I actually enjoy constructing flat-pack furniture. I will watch almost any televised sport (nothing involving horses or cars), but I am a social media refusenik. And that’s about all you need to know!