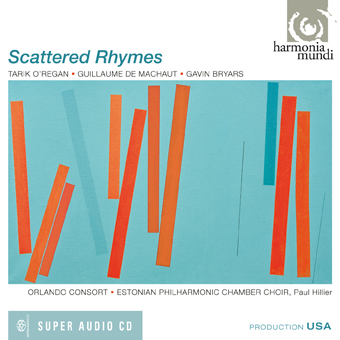 The Orlando Consort combines forces with the Estonian Philharmonic Chamber Choir under Paul Hillier. It is an interleaved programme of ancient and modern which contrasts the music of Guillaume de Machaut and Guillaume Dufay with modern composers like Tarik O'Regan and Gavin Bryars.

Machaut’s extraordinary Messe de Nostre Dame was not only the first complete mass setting in history, but also the first whose composer can be identified, making it emblematic of the Ars Nova style of the 14th century. In this recording, the Orlando Consort performs the mass in parallel with a work by Tarik O’Regan (born in 1978) which was inspired by it. Scattered Rhymes links two texts from the same period as Machaut’s mass, one by Petrarch, the other an anonymous English poem. Both of them subtly combine earthly and divine love, while the music blends polyphonic tradition and contemporary inspiration.

"Probing the line between very old and very new music, the Orlando Consort's latest CD sometimes makes it difficult to tell which is which. The O'Regan piece -- in which the fourmember Consort sings the Petrarch and the Estonian Chamber Choir, the English poems -- sounds exquisite and delicate. The result is a kaleidoscope of color for the ear that shows the variety and modernity of so-called early music." Anne Midgette, The Washington Post (June 29, 2008)

of the Machaut Mass: "[the] Orlando Consort bring vibrant energy and ear-pleasing resonance to this ancient, unusual masterpiece"

"I'll end by urging anyone interested in a consistently engaging, musically challenging, and aesthetically rewarding experience to delay no longer: get this disc!"  Classics Today.com
David Vernier
"The performances are sublime.."
"The Orlando Consort (countertenor, tenor and baritone) sounds even in the numerous extremely difficult passages almost heavenly..."
"This is one of the most fascinating CDs of recent times."  Aart van der Wal - www.opusklassiek.nl
This fascinating disc spans the centuries by coupling medieval masterworks with modern works inspired by them. The four male voices of the Orlando Consort bring vigour and tonal variety to Machaut's Messe de Notre Dame, and its tenor Mark Dobell gives a lilting account of the composer's song Douce dame jolie."

The Consort's perceptive accounts of Du Fay's Ave Regina celorum and Gavin Bryars's Super flumina complete the picture."
Matthew Rye - Daily Telegraph
Even if it wasn't now possible to kit yourself out with a genuine SACD player and some surprisingly effective multichannel headphones for around £150, it would be worth investing in the format just to collect the Harmonia Mundi SACDs produced by Robina Young, one of the format's most committed advocates. This is a typically unfaultable example.."

Matthew Rye  BBC Music Magazine
"Mind-expanding music and performances; a stunning recording."
Andrew McGregor BBC Radio 3 CD Review
"This is a thoughtfully chosen collection of ancient and modern works, each of which seems to tell us something compelling about the others. The a cappella performances by the Orlando Consort are nearly immaculate, and the recorded sound is reverberant and sumptuous."

Joshua Rosenblum OPERA NEWS.
"Singing and music are of the highest order. The superb UK-based Orlando Consort (a countertenor, two tenors, and baritone), founded in 1988, is paired with the straight-faced Estonian Philharmonic Chamber Choir... choir members sing with a soaring, innocent resonance that inspires the deepest respect. This disc will likely be in the running for multiple awards later in the year. It's that good." Jason Victor Serinus Bay Area Reporter

"The performance of the Machaut, by the Orlando Consort, with bass Robert Macdonald, is exceptionally tonally pure and intimate"
"The performances throughout are absolutely stellar, astonishing in their rhythmic precision, unwavering intonation and interpretive bravura."
Stephen Eddins  Allmusic.com

"The singing here has the purity of fine hair, exactly what we would expect from the Orlando Consort."
Andrew van Parijs  Klassieke Zaken Issue 3, June 2008
"Stunning, perceptive singing makes this a 'must have' disc."
Shirley Ratcliffe, Choir and Organ, July/August 2008 issue